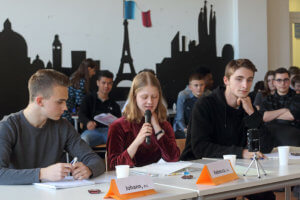 The DFG-LFA has already had its seventh edition of the debating contest in English! All 2nde classes took part in the qualifiers on 29th March 2019, assessed by a jury of members of the Deutsch-Amerikanisches Institut, of University of Saarland and of our very own school’s teaching staff.

“Security cameras are an invasion of our privacy”, “Digital books are better than paper books” or “Money can buy happiness”… those were the controversial issues that opposed the debaters. It was hard to decide which teams were the best and the distribution of points showed how close it was.

However, the 2nde S2 and the 2nde L1 were the ones to make it through to the final round on 2nd May. Here the motion for the two remaining teams was “Students should do mandatory community service”, the students of 2L1 taking the affirmative stance against the opposing team of 2 nde S2. They were vying for a cup, a title and the possibility to offer each of their classmates a free cinema ticket.

Well done to all the participants whose language level and debating skills were particularly high, and above all well done to the winning team of 2nde L1! Thanks to the lively audience who supported the teams throughout the three debates, and brought in good mood and fine spirit.